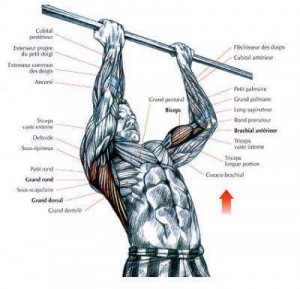 The difference between a pull up and chin up is as simple palms facing you (Chin Up) opposed to palms facing away from you (Pull Up). Chin ups involve more bicep muscle groups and are widely considered easier to perform. Pull ups involve the large muscle groups in your back. One isn’t better than the other both have their purpose. I practice both movements. When my muscles are weak from pull ups I switch to chin ups to increase my reps and involve as many muscle groups as possible.  Chin ups and pull ups are superior to other movements.  There is no other excercise movement that includes 24 separate muscle groups as seen on the chart below. Swap your grip and target another 24 muscles with the chin up as seen below. Pull up bars are a valuable piece of garage gym equipment considering they can hit a total of 48 muscle groups.