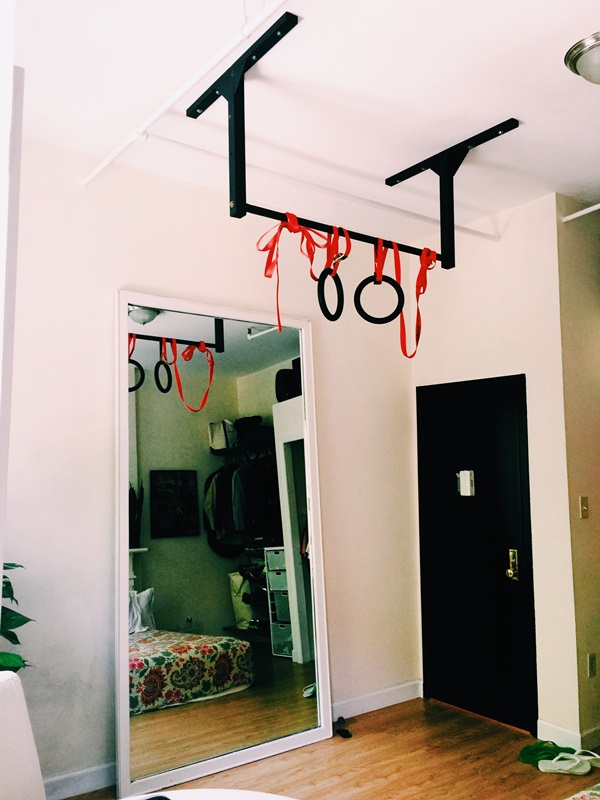 Here’s my installed Stud Bar.  I live in a 14’x14′ studio apartment in NYC and I was determined to have a home gym.  I created it, too, by putting together the following:  a big mirror, two 15lb Club bells, a Manduka yoga mat, and a Stud Bar chin up bar with disco rings.  The Stud Bar is by far the most essential piece. Jason R.

I know most people would find it ridiculous to put a Stud Bar in their living room/kitchen/bedroom/office but I’m telling you, it’s what makes the difference in my routine.  I’m not exactly super fit.  Doing 10 pull ups in a row is not something I can achieve yet.  Being able to casually hang from the disco rings for 30 seconds intermittently all day long has been a game changer.  My grip strength is improving, my shoulders no longer have pain, and I’m burning more fat by exerting throughout the day.  Plus, it’s a visual reminder of my commitment to my health and strength.  I encourage everyone to buy a Stud Bar kipping pull up bar and put it right in the middle of the most-used room in the house!

A note on installation.  I live in an old pre-war building.  The good news is that my ceiling has massive 2″ joists that are perfectly spaced and so my Stud Bar is very secure.  The hard part was finding those joists.  I had three inches of wooden slats and plaster that made using a stud-finder impossible.  I had to bring in a carpenter to cut a whole in the ceiling and then measure the thickness of the plaster as well as calculate where the joists were.   After he used a 10″ drill bit to confirm we found them, we installed the Stud Bar using 6″ lag bolts instead of the 4″ bolts that came with the kit.  This was to accommodate for the 3″ of plaster and wood, ensuring that we had 3″ of lag bolt in the joist for safety.  After it was installed, we popped the slice of drywall out and patched and plastered the hole.  It was a little bit more work than a typical installation on exposed studs in a garage, but I’m really happy with the result.  Even accounting for the extra labor and fees, it is still an incredible value.

Thank you so much for this extraordinary product!